If you missed my part one of my VegFest recap all about community, click through here!

Being vegan for so long and living in a city that until semi-recently had limited options for vegans, I’m not used to having choices when dining out. Even now, depending on where I’m at, I might have to settle for a side salad and baked potato, or there will be one or two vegan possible dishes to choose from. So, when I was beckoned by booth after booth of the most amazing vegan food, I didn’t know how to choose!

Some of our spoils

Gluten-Free Goat was there with their brownies, cookies, and donuts. I got to try their donuts at Amazing Cafe and they make such a nice snack! 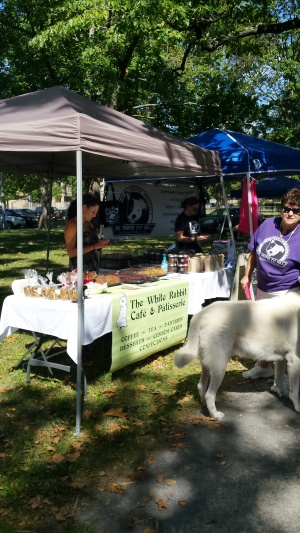 The White Rabbit Cafe and Patisserie looked awesome and I kept trying to get my dad to buy some of their sweets for my mom. She’s the one in the family with the major sweet tooth. I later heard that their coconut milk caramels are crazy, so I’ll have to try them next time I have the opportunity. 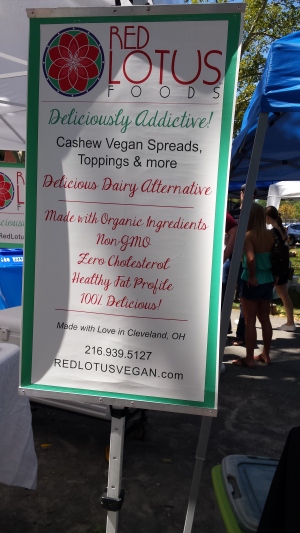 Red Lotus Foods, from neighboring Ohio, had creamy cashew spreads that were fermented with rejuvelac. I meant to circle back and pick up one of the sun-dried tomato and black garlic spreads and completely forgot in the whirlwind of the fest. I sampled that one and the spirulina bleu, and wow, that sun-dried tomato one will make your head explode it’s so good.

Sree’s, a classic. I’ve eaten Sree’s for, oh I don’t even know, more than 10 years. They’re the go-to for cheap, filling, flavorful vegan Indian eats in this city. I thought I was going to get some of their food as my main meal, but there were so many other things to try and I ended up going with something new.

There are even new delivery/order services like Chip and Kale and Elements popping up in the Pittsburgh area. These samples of cobbler and marinated tempeh from Elements were so good. Vegan comfort food the healthy way. 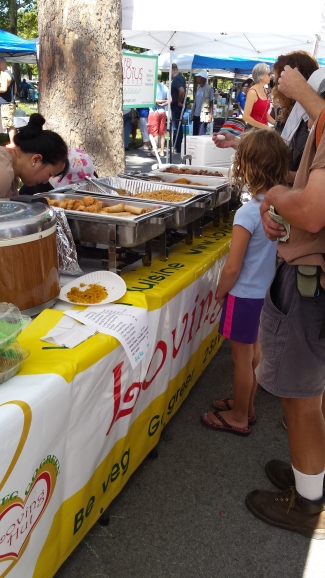 Loving Hut was there with a buffet of food including the spring rolls that I love and the pandan cake that is just downright dangerous. I decided to forgo their offerings and instead invited my dad out to their buffet sometime with my partner and I.

Istanbul Grille is downtown. I’ve never had their food before, but they were kind enough to give me a loaded falafel sample. They don’t mess around. This was awesome falafel!

I was going to get some mac and cheese with 2 toppings (broccoli, caramelized onion, or portobello) from Fortuitea Cafe (unpictured), but again my eyes were bigger than my stomach! It’s alright though, because I have a standing lunch date with my grandma to go to the cafe.

Randita’s had their truck there. Hooray! After seeing my dad’s jaw dropping open at some of their listed offerings, I suggested he get something to eat there. I’ve only been to their cafe once, but the food was high quality and they know how to make a salad! He got a hot sausage sandwich and a salad with lime vinaigrette. They did not disappoint!

And there was cold-pressed juice. YOU. GUYS. You know the way to my heart!! I got the Healer (kale, pear, ginger, wheatgrass) which was my favorite, and Black and Yellow (pineapple, orange, blackberry, lavender). Sometimes I get tired of juice shops/lines offering the same blends across the board, especially since I make the standard green juice at home so often. 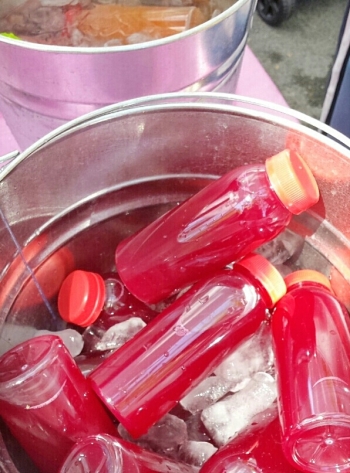 I was excited to see them mix it up. And, I totally wanted a Melon Berree and Minty Lemonade. I also got a sample of E3Live mixed with green juice. Geez, having so many choices is hard. So, I guess people have a point when they say being vegan is hard. Haha!

My favorite was Onion Maiden. A friend of mine at the Animal Rescue League booth told me that they had amazing cupcakes. The cupcake was not only bonkers good, but it had an awesome name. First, I lost it because the name of the cupcake was the Cock Sparrer cupcake (a 70s punk band I love), then I lost it when I read the description: coconut cake, lime curd, sriracha buttercream. And I’m not even a cupcake person.

While in line for the cupcake, I noticed their taco looked enticing, so I got two of those, too. Jackfruit tacos with enoki mushrooms, cabbage slaw, and kiwi salsa. They were exceptionally good as well.

Besides their killer food, another thing I loved about them was their punk/metal aestethic. Punk culture is what introduced me to veganism when I was still a kid. At the time, the punk community here was much more political with many choosing to be straight-edge, vegan, and various radical ideologies. As the vegan thing blew up in the mainstream, it sort of died down in the punk scene. It’s really cool to feel this part of myself represented at VegFest. Onion Maiden, I love you forever and always. Please get a storefront or a truck or something!

And believe it or not, there was more, so much more. How amazing is this vegan world we are moving toward? I never in my teenage dreams would’ve thought that the Pittsburgh vegan scene, or the world-wide vegan scene for that matter,  would’ve boomed at such a fast pace.

How can I sum up Pittsburgh VegFest? I really can’t. Really. It was too much fun! I’ll just let my recaps do the talkin’.